A province governed by India’s Prime Minister Narendra Modi for 13 years is impeding his plans to promote clean energy.

Modi’s effort to make liquefied natural gas more affordable, by halving its import tax in the government’s annual budget Feb. 1, is being scuttled by the withdrawal of tax benefits by the western Indian state of Gujarat, through which 90 percent of the LNG used in India passes. 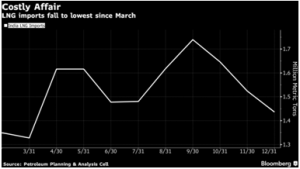 Loss of the state concession has resulted in higher prices for domestic and industrial consumers across the country. It has also sparked criticism from environmental groups, who fear it will hurt the competitiveness of gas and discourage use of the cleaner fuel. India is struggling to follow the U.S. and Europe in giving natural gas a greater role in its energy basket as it battles air pollution. 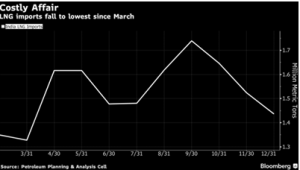 Levies across the country add about 40 percent to the delivered price of LNG by the time it reaches the end user, according to Prabhat Singh, chief executive officer of Petronet LNG Ltd., the nation’s biggest importer of the super-chilled fuel.

“If gas needs a push, we need to soften the taxes,” said B.C. Tripathi, chairman of India’s biggest gas utility GAIL India Ltd. Currently, import taxes are levied on LNG but not crude, he said. That along with other levies makes natural gas uncompetitive, and unless there is a level playing field, the required investment in infrastructure won’t be made, according to Tripathi.

The levies encourage some users to opt for cheaper alternatives such as furnace oil that pollute India’s air, said Bhure Lal, chairman of Environment Pollution (Prevention & Control) Authority, a panel of experts advising the federal government on ways to curb pollution.
‘Alternative Fuels’

“We are seeing several cases where industries are opting for cheaper alternatives such as petcoke and furnace oil, because state levies have made natural gas unaffordable,” he said. “Businesses tend to put profits before human health. But we need to take a holistic view of the situation.”

India’s top court this month asked the government to implement a ban on use of petcoke and furnace oil in the national capital and its surroundings, reacting to recommendations from the EPCA. The environment ministry met stakeholders Feb. 16 to discuss a nationwide curb on use of dirtier fuels including petcoke, according to people familiar with the development.

India and China topped the global list of countries with maximum early deaths due to air pollution in 2015, according to a report released this month by Boston-based Health Effects Institute.

The withdrawal of the tax credit has resulted in an effective value-added tax rate of 15 percent from 4 percent earlier, according to Rajeev Kumar Mathur, managing director of Mahanagar Gas Ltd.
Raising Prices

That prompted Indraprastha Gas Ltd. to raise prices of compressed natural gas and piped natural gas. While Haryana City Gas Distribution Ltd. restricted its increases to CNG, used in vehicles, it is awaiting an opportunity to do the same for industrial users. Both supply gas in and around the nation’s capital.

“At the moment, we’re deterred by competition from furnace oil, which is cheaper,” Haryana City Gas’s CEO Rahul Chopra said in an interview. “Once there is a ban on its use, we’ll be in a position to increase the prices for industrial consumers of natural gas.”

India is seeking to increase the share of natural gas in its energy mix to 15 percent by 2020 from 6.5 percent at present.

That goal may count for nothing if the tax burden on consumers is not reduced, said Debasish Mishra, a partner at Deloitte Touche Tohmatsu LLP in Mumbai.

“Indian policy makers have always stated their intention to increase the share of gas in the primary energy basket, to diversify the supply mix and to tackle air pollution” Mishra said. “Massive taxes — both at central and state level -– levied before gas reaches the end consumer, are contrary to this vision.”