Is city gas really the most important driver for incremental growth in the gas sector? At least, it seemed to be at the beginning of the ongoing decade. The crude price was riding high, moving towards $100 a barrel and therefore, gas appeared to make much more economic sense against most of alternate fuels. Domestic gas supplies seemed to be promising and in abundance for upcoming projects. The Regulatory Board was just set up and it was thought that this would facilitate the fast roll out of City Gas networks (GAs) across the country. The result- PNGRB held multiple rounds of bidding to allot GAs; research and analytic firms pegged high numbers from city gas; GAIL charted out its plans to boost the infrastructure network and various joint ventures were planned to take up CGD projects across GAs; Government prioritized and increased gas allocation to the sector. As NGS reviews the sector today, in the middle of the decade from where we started, we could say that only little progress has really happened. The key reasons have been a complicated and ambiguous CGD bidding process, inadequate availability of domestic gas and import of high priced long term contracted LNG. Here in this paper, we present the current status of demand and supply, recent developments, opportunities and challenges in the city gas distribution sector.

Gas is universally recognized as the fuel of the future with the increased benefit to the environment and its efficiency of utilization. In recognition of its immense benefits, the importance of the CGD sector has been recognized by the government from time to time, with the increased allocation of domestic gas to the sector. The Gas Utilization Policy has accorded top priority to CGD sector. However, despite the support of the government the development of the CGD sector has been slow.

It was generally expected that after the formation of the PNGRB, the sector would develop faster; however, instead of accelerating the process the Board for a variety of reasons has been unable to provide the necessary impetus to the sector. One of the key reasons has been the Board’s rules & regulations including the CGD bidding process. And in combination with the inadequate availability of domestic gas, the CGD sector for now has remained not so upbeat.

Inadequate availability of indigenously produced gas is being augmented by increased import of LNG. In order to further augment the availability of gas, three more LNG terminals are in various stages of development on the east and west coast of India. Once completed, additional gas shall be available to the CGD sector, but the crucial point will be its affordability.

The affordability of imported LNG is widely accepted in the CGD sector because between 80-90% of CGD load is industrial, commercial and automotive (CNG) where high priced liquid petroleum is being replaced. However, with the sliding crude oil price, alternative liquid fuel is becoming an economic option. And, with the continuance of administered pricing regime (APM) for LPG to the residential sector, it remains a challenge to increase supply of piped natural gas to the residential sector. Though the slide in crude price has had a positive effect on the spot cargoes for LNG and price has dropped by around 50%, LNG procured under long term contracts (to which most of the current supply is tied up) is still to see a significant drop in price as it is linked to 60 months floating average price of crude.

The current consumption of gas in the city gas distribution sector is around 16-17 mmscmd. Gas makes economic sense vis-à-vis competing fuels for most of the segments in the sector, viz. industrial, commercial and vehicular. Industrial and commercial segments are the most attractive consumer segments given large anchor load, high affordability and comprising 60-70 percent of total PNG volumes.

Vehicular segment is expected to consume 25-30 per cent of total CGD volumes while domestic consumer segment will have limited potential, given government subsidies on LPG, high servicing costs and the corresponding low volume off take. Demand for CGD is expected to be around 30 mmscmd by 2016-17 as per the current projections with addition of new cities, price advantage of CNG and increased use of PNG in industrial and commercial sectors.

Given tumbling crude prices since June 2014 and costly LNG imports, industrial/commercial consumers are dumping cleaner but expensive gas in favour of cheaper liquid fuels. This is hurting volume off-take of gas suppliers and pushing up environmental costs for India. Crude oil prices have almost halved in a year, and are currently trading at around $65 a barrel. Consumers are showing increasing preference for the cheaper alternative – fuel oil (20% cheaper than gas) especially in glass, ceramics, chemicals, pharmaceuticals, agro, engineering and other industries and consequently most CGD companies including Mahanagar Gas, Gujarat Gas and Indraprastha Gas are under pressure. The switch for these clients has been smooth as factories increasingly use equipment that runs on both gas and liquid fuel. The switch has also been faster in the regions where environmental laws are not strictly implemented. The significant difference is mainly because suppliers are locked into long-term LNG purchase contracts with producers overseas. In some cases, companies such as Gujarat Gas are helping clients by purchasing cheaper spot LNG instead of relying on the long term tied up expensive LNG and others such as Indraprastha Gas is offering discounts to its off-takers to deal with it. The trend is likely to continue for at least until end 2015, after which gas price is expected to fall further and crude prices to rise a little leading to a market situation where the two become competitive.

The MoPNG through its order in August 2014 has promised higher priority in gas allocation policy to the CGD sector. The Supreme Court and the High Courts of Gujarat and Mumbai have also instructed the government for priority allocation of to the CGD sector. This has given a new thrust to the CGD industry. Earlier to this, very few entities were allocated indigenous gas and others had to source their needs from RLNG and it resulted in large variation in selling prices of the CGD companies in different geographical areas. In some GA, the CNG price was even higher than that of diesel. The new gas allocation gave a uniform playing field to all CGD operators.

The MoPNG in March 2015, sought comments on new draft guidelines seeking to grant marketing rights for CNG including setting up CNG Stations. The ‘Draft Guidelines for Granting Marketing Rights for CNG as transportation fuel, including setting up CNG Stations’ provides rights or licence to retail the fuel to automobiles by setting up CNG Stations to any entity that has invested or shall invest Rs 500 crore in oil and gas infrastructure. Prior to the Ministry draft guidelines, the union government had authorized entities like Indraprastha Gas and Mahanagar Gas for retailing CNG to automobiles in Delhi and Mumbai, respectively, in early 2000. However, after the establishment of PNGRB in 2006, the task of authorizing CNG stations came under its purview. Consequently PNGRB, as per the PNGRB Act, included CNG stations as part of the City Gas Distribution projects and “compression charge” was included as one of the biddable item for evaluating potential CGD projects through the bidding route adopted under Regulations on “Authorization to lay, build, operate and expand city or local natural gas distribution network”.

Since 2006, entities have been applying to PNGRB under a bidding system and not the government for rights to retail CNG alongside selling natural gas as fuel within a defined geographical area as part of the CGD bidding process laid down by PNGRB Regulations. While PNGRB has been issuing the authorization to set-up CGD projects including retail CNG as well as PNG to residential, commercial and industrial segments, the current draft guidelines appear to be in direct conflict with PNGRB regulations. The industry members including the Natural Gas Society have responded to the draft guidelines by writing to the MoPNG highlighting pitfalls of implementing the guidelines. The industry is still to hear from the Ministry on their final decision.

The PNGRB has granted authorization to several CGD entities for laying, building, operating or expanding the following CGD network subject to the PNGRB (Authorizing entities to lay, build, operate or expand city or local gas distribution networks) Regulations 2008 with certain terms and conditions. Needless to say, PNGRB will be required to play a key role in the development of this infrastructure in the sector. The positive triggers will have to come from PNGRB with added support from State governments to expand base of CNG and PNG supplies across the country.

Over the years the CGD industry has faced several challenges including declining availability of domestic natural gas, increasing imports of high cost LNG, gas pricing (administered vs market driven), change in gas utilization policy, regulatory issues, pipeline integrity and safety concerns, multiple clearances, and at times standards based on existing legislation not precisely suited to the industry. These have impacted adversely on the economics of the business. In order to develop the CGD sector, efforts are required to increase availability of indigenous gas, import affordable LNG and develop requisite infrastructure. PNGRB has envisaged a roll out plan of CGD network development through competitive bidding in more than 300 possible GAs on the basis of EOIs submitted to the Board and on sou motu basis. The execution of this plan would only be possible once the above issues are resolved. 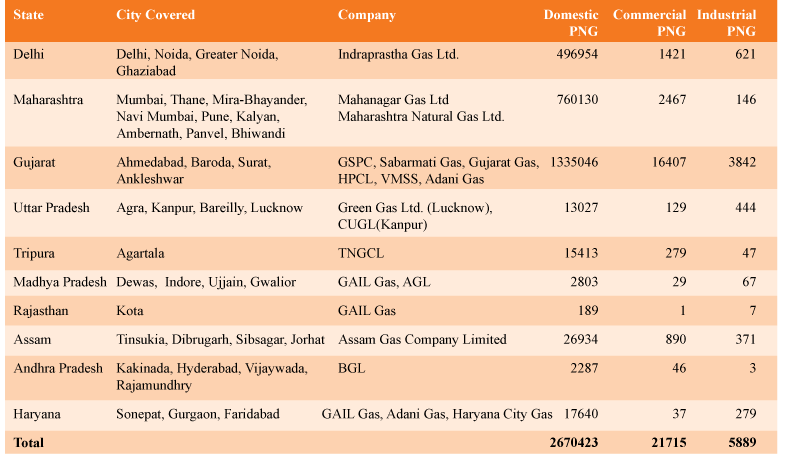 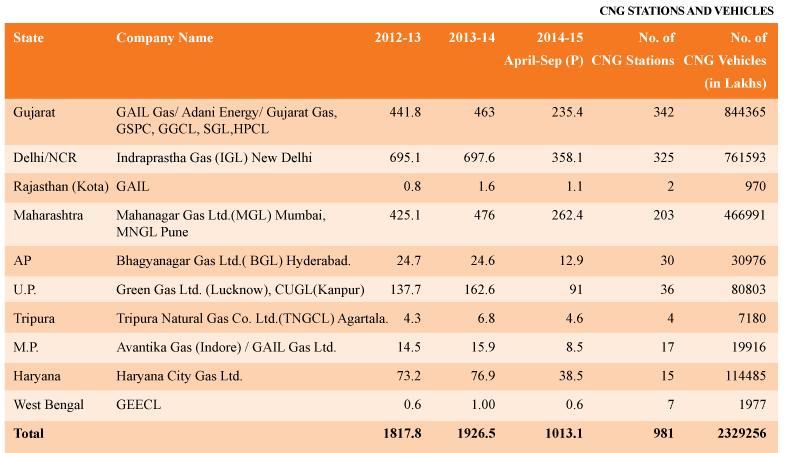 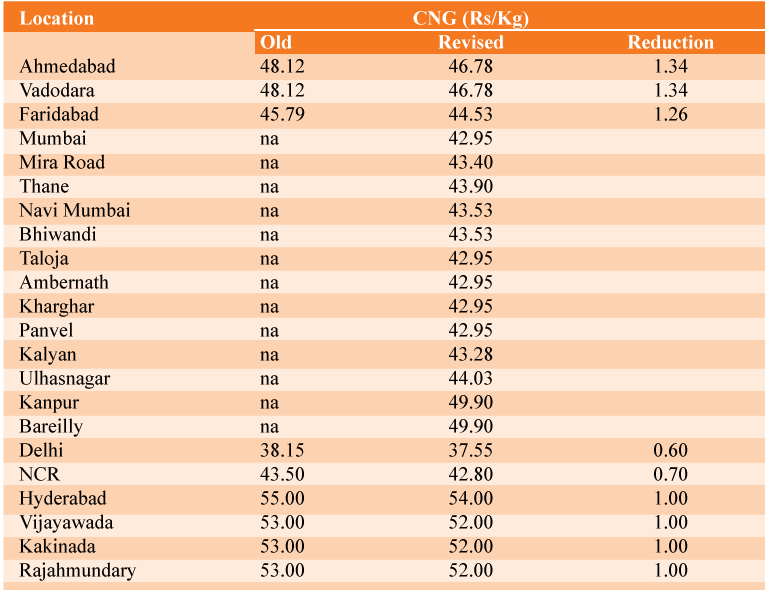 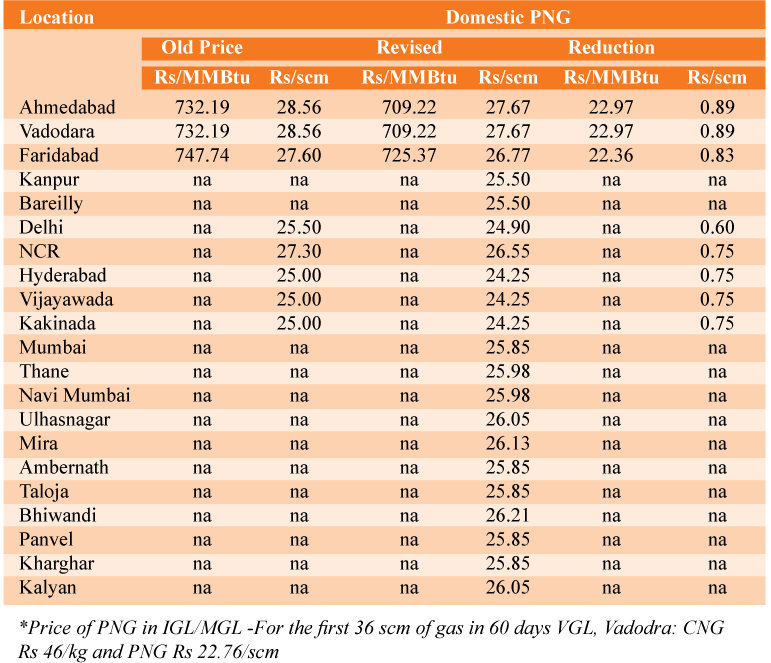 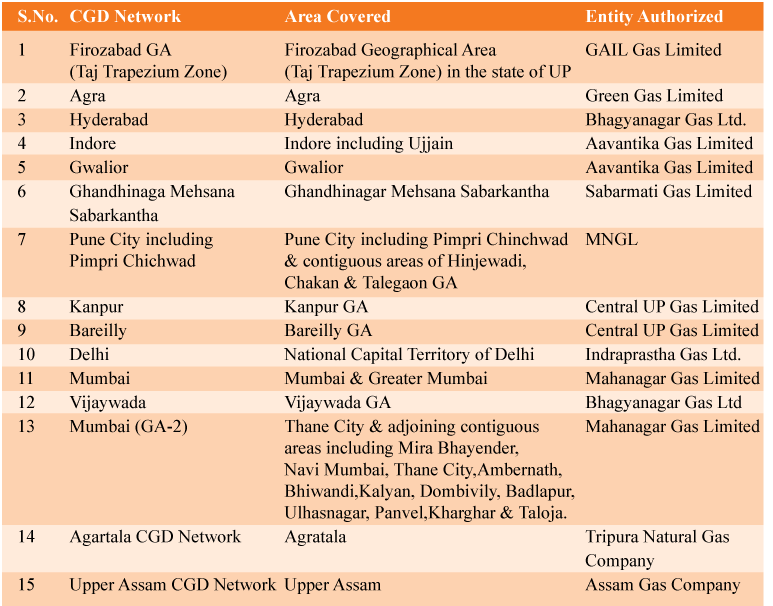 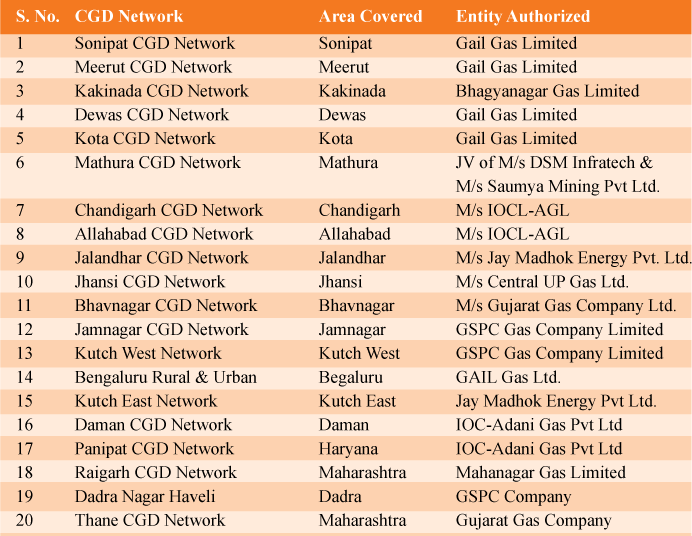 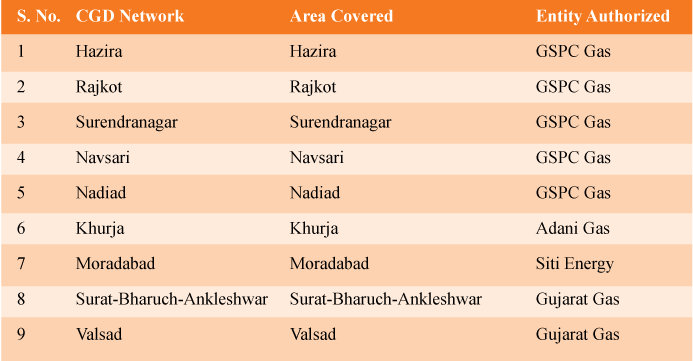 Source: All data in above tables has been collected from PPAC or CGD companies