KOCHI: In a proactive step to expedite the works on city gas project, the district collector has asked Indian OiI-Adani Gas
Pvt Ltd (IOAGPL) to come up with a proper schedule to give 40,000 piped natural gas (PNG) connections in the district within five or six months. Meanwhile, IOAGPL has started efforts to get extension for the project, the deadline of which is in October, 2020. 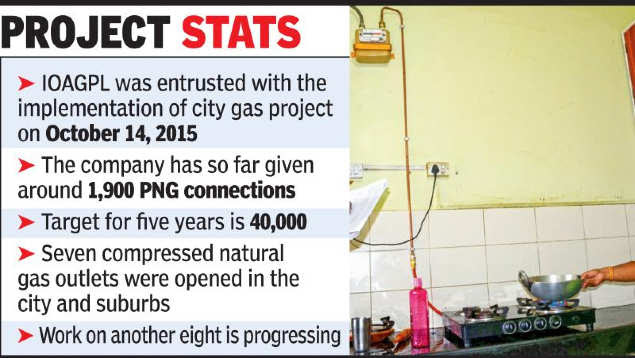 TOI had on Monday carried an article regarding the slow pace of the project, which was launched in October 14, 2015.

On Tuesday, collector S Suhas summoned IOAGPL officials and sought clarification for inordinate delay on their part in implementing the project. Then, the officials said that there were various reasons for the delay, including shortage of workers due to the lockdown and subsequent restrictions. Even though the lockdown has been eased, labourers who mainly hail from other states are not available, the officials said.

Efforts for seeking nod from Petroleum and Natural Gas Regulatory Board (PNGRB) for giving extension for completing the project have also been made.

According to IOAGPL officials, many man-hours were lost due to various reasons like floods ¡n 2018 and 2019.

“We expect that there will be a positive response from PNGRB,” an IOAGPL official said.

According to IOAGPL officials, though the agency could give just 1,900 PNG connections so far, it has completed the plumbing works ¡n around 15,000 households in various local bodies in Kochi. “Moreover, we have laid pipeline for supplying PNG. We have also started seven CNG outlets and work on another eight is progressing. So, we will be able to achieve the target without much delay,” an official said.