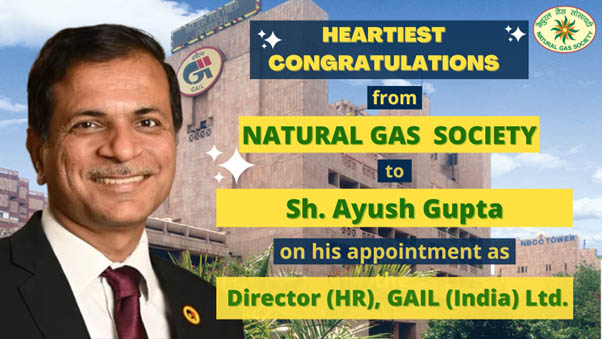 Sh. Ayush Gupta on Monday, August 22, took over as Director (Human Resources) of GAIL (India) Limited, the nation’s largest gas utility. Prior to this, he was chief general manager (human resource development) in the organisation.

An Electrical Engineer from IIT Roorkee and MBA in Operations Management, Sh. Gupta has over 30 years of experience in the fields of training and human resource development, talent acquisition, leadership development, performance management, HRD initiatives, project management and operations and maintenance. He is also on the Board of Directors of GAIL Gas Limited, a wholly-owned subsidiary of GAIL.

Sh. Gupta is recipient of the prestigious Chevening Rolls Royce Science, Innovation, Policy and Leadership fellowship from Oxford University in 2013, Winner of the National Corrosion Awareness Award 2004 and Emerging HRD Thinkers Award in 2011. He is the co-editor of the book ‘Natural Gas Markets in India’ published by Springer International and has to his credit several best papers awards for papers published and presented at national and international forums.

He has successfully led the improvements in various HRD system, process and practices including the digital initiatives for better engagement and enhancement of employee experience. He has been instrumental in formulating talent acquisition strategies to build an organization’s strong human resource pipeline. Sh. Gupta was involved in implementation of the City Gas Distribution network in Taj trapezium zone and led several initiatives for bringing down the stock loss in the region during his initial career stint in GAIL.