Assam is waking up to the threat staring at Dibru-Saikhowa National Park less than a week after a gas well in an oil field operated by Oil India Limited (OIL) in Assam’s Tinsukia district blew out causing great damage to the region’s wetlands and biodiversity.

Baghjan is located about 43 km from Tinsukia where the gas well blowout occurred on May 27. This area is close to Maguri-Motapung wetlands, barely one kilometer from the oil field where the incident took place. The site of the blowout has been identified as an OIL rig at OIL well in Baghjan in the Motapung Maguri Beel area.

Spread over 340 square km, Dibru-Saikhowa National Park is a biosphere reserve and home to 36 species of mammals, including tigers, Gangetic dolphins, and feral horses in addition to 382 bird species. The National Park is in close proximity to the Baghjan oil field.

Oil India Limited has claimed that it is releasing natural gas in an uncontrolled manner since the incident on May 27. “The pumping of water to the well through the casing valve is in progress to minimize chances of fire and digging of water reservoir near well site plinth and preparation of the area for placement of two numbers of 2500-gallons capacity pump is in progress to facilitate huge quantity of water that will be required at the time capping of the well.

60 per cent of the job completed,” the press release by Oil India Limited said. The release further added, “Testing of equipment required for controlling of the well is in progress. It has been assessed that approach to the vicinity of the well would not be safe due to gas gushing at high pressures. Hence, necessary equipment are being mobilised and fit for purpose equipment (hydraulically driven mechanical transporter) are being fabricated at OIL workshop under the supervision of OIL & ONGC CMT Teams. Fabrication job is in progress. Arrangement for collection of required quantity of water from the source is in progress.”

A Singapore-based firm M/s Alert Disaster Control has also been contacted and two experts are scheduled to arrive at the site in Assam on June 4, the press release added. It went further to state, “All safety and security measures are continuously being monitored to protect surrounding villagers and their properties, working teams. Protection of the environment would be paramount while carrying out the Well Control Operation. OIL fire service and with mutual aids are stationed 24×7 at site since 27-05-2020 for continuously water jacketing the well to avert any eventuality. Presence of Gas and air and water quality is being monitored at constant interval at strategic points. Layers of condensate deposited near the vicinity of the site are being picked up.”

Following the incident, around 1610 families have been evacuated from affected areas and shifted to four relief camps set up in Baghjan.

However, the leakage of natural gas and condensed oil continues to impact nearby regions. A number of fish, Gangetic dolphins and birds along with domestic cattle have already succumbed to the leaks. The carcass of a Gangetic dolphin was found in a lake close to the Baghjan oil field by locals. “Numbers of fish, cattle, goats have died and grasslands, vegetables and the entire environment have very badly affected in the area. We demand the Oil India Limited to give compensation to every household who are very badly affected,” a local resident said. Assam Forest department PRO Sailen Pandey said an Expert Committee comprising scientists and environmentalists has been formed as the result of a directive by state Forest Minister Parimal Suklabaidya. “The Committee will assess the impact of the blowout of the gas well and suggest measures for immediate action,” Sailen Pandey said. Also a part of the expert committee is Dr Aswini Kumar Borua, Director (Retd) of the Science, Technology & Environment Council. Other members will include a domain expert from the Assam Pollution Control Board, the Deputy Commissioner of Tinsukia district or a representative, the Conservator of Forests (Wildlife office of PCCF, WL and CWLW) along with the Divisional Forest Officer of the Tinsukia Wildlife Division.

The Expert Committee is likely to submit its report by June 10.

In its order, the Assam Forest Department stated that formation of aerosol with water molecules and natural gas particules is taking place and a thin oily layer is being formed on the water surfaces in the surrounding area since a lot of water jets are being thrown at the well at the gushing natural gas to prevent the possibility of a fire. 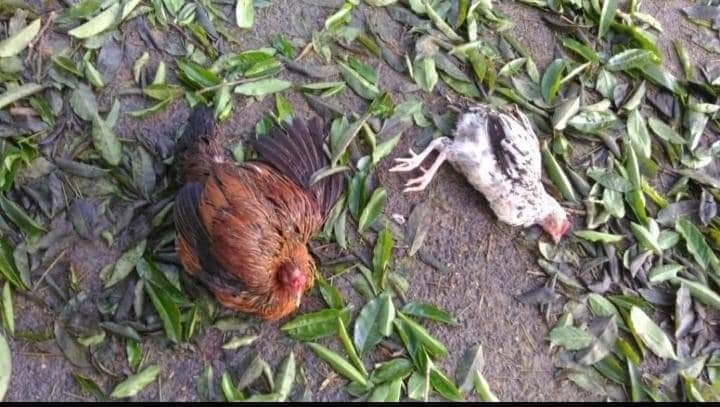 Assam Chief Minister Sarbananda Sonowal on Tuesday spoke to Union Minister for Petroleum and Natural Gas Dharmendra Pradhan over call and asked for his help in getting foreign experts to plug a leak in the well of Oil India Limited at Baghjan that is leading to spewing of natural gas in the air.

OIL’s Baghjan oil well caused rupture on Wednesday morning causing spewing of gas into the environment. Though best of the efforts have been put in place by the crisis management team to control the release, gushes of natural gas have been oozing unrelentingly.