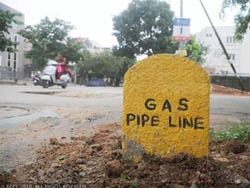 After the announcement of results of the 11th bidding round of PNGRB, BPCL’s committed investment in CGD network, on a standalone basis, would increase to over ₹22,000 crores for development of 23 GAs, including ₹10,000 crores for the six new GAs. BPCL won licences to retail CNG to automobiles and supply piped natural gas for cooking purposes in six geographical. BPCL had won six GAs in 19 districts for setting up City Gas Distribution (CGD) networks.

The CGD footprints of BPCL, along with its JVs, will now extend to 48 GAs covering 94 districts in 18 states, across India. Currently, with a presence in 63 districts, including prominent cities, BPCL along with its JVs together hold 33% market share in the CGD sector in the country.