Oxford Institute of Energy Studies (OIES) in a recent study analysed in depth about the possibility of Argentina becoming a significant exporter of Natural Gas in the World. It is found that over the past few decades, Argentina managed to maintain its dominance in South America’s gas market till 2003 with a better export rate but gradually declined leading to deficits post 2008.  It had to depend on imports to meet the country’s hydrocarbon production and demand. From 1993 through 2002, Argentina strongly expanded its internal and external natural gas market and also exported excess of 20 MMm3/d. From 2002 to 2009, as the government intervention increased, demand also increased and the country became a net gas importer However discovery of new unconventional oil and gas reserves in Vaca Muerta enabled the country to reduce imports. 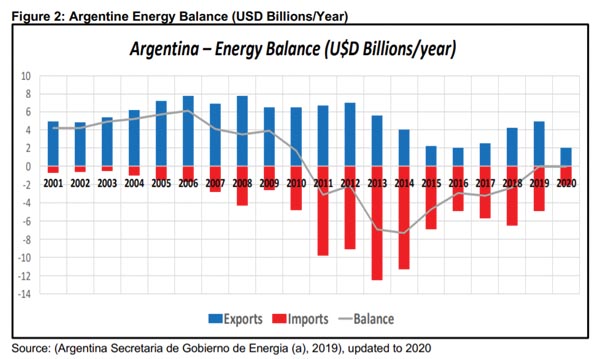 Export increased from 1.5 MMSCMD after the Bandurria (Argentina-Chile) pipeline was built, to 20 MMSCMD in 2004. Due to low prices, and insufficient investments in exploration. Based on the legal principle that grants priority to domestic consumption, the government imposed direct and indirect restrictions on gas exports, to deal with insufficient supply. In the period, 2004-2017 Argentina lost its role as a regional natural gas exporter and faced energy imports with a strong negative impact on public accounts.

Uncertainties arising from regulatory changes and low gas prices reduced investment in exploration and led to a significant drop in reserves. Exports were cut to meet the growing domestic demand. To increase imports, two LNG import terminals (Bahia Blanca and Escobar) were commissioned in 2008 and 2012 respectively. Imports began to overwhelm the nation’s finances, in 2013 the government decided to create “plan gas”, where producers committed to increasing production above an adjusted baseline would receive incentives paid by the national treasury. This shifts the whole focus towards the development of unconventional resources and gradual return to gas exports from 2015 onwards.

The financial crisis and the presidential elections of 2019 caused great uncertainty about the maintenance of the economic rules in the sector. As a result, companies put a brake on investments, a situation aggravated by the pandemic. President Alberto Fernandez maintained the freeze on gas prices but faced the additional challenges posed by the renegotiation of Argentina’s debt and the strict lockdown measures in the wake of COVID-19.

The Plan Gas.AR, assured a capped price of USD 3.21/MMBTU for four to eight years contracts, covering Residential and Power Plant demand. This encouraged an increase in production. Although production started to recover in early 2021, this might have come a bit too late and will not be sufficient to prevent LNG imports in winter 2021. In 2020, the bill for importing LNG was relatively low, as Argentina benefited from low international LNG spot prices when IEASA bought cargoes for the winter period. In 2021, The plan assures producers about cash flows and price predictability for the next 4 years.

It is estimated that under the Gas AR Plan, domestic production  will  rise from 110 MMm3/day to 113 MMm3/day in the period 2020-2024. To compete with USA and Qatar LNG, wellhead prices might need to be kept at USD 2- 3/MMBtu. The issue of seasonal supply is an obstacle to deliver LNG at competitive prices when compared to projects in the USA and the Middle East.

Production costs have been decreasing to levels that are more competitive since 2018. Argentine producers have expressed that they do not need subsidies since the learning curve for productivity has shown steady progress. Under the current economic scenario with a lack of political and economic predictability, and the absence of clear long-term energy policies, it is reasonable to assume that new LNG projects are likely to be implemented post 2030. Therefore, Argentina might not become a relevant LNG exporter in this decade but it will continue to play a significant role as a regional seasonal exporter through its existing infrastructure of export pipelines.