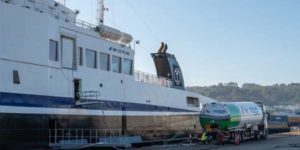 For the first time in its history, the port of Ferrol carried out LNG bunkering operations for ships that use this product as fuel. Two vessels were supplied, both on the outer jetty, which is the pier of the inner dock where small and medium-sized cruise ships usually dock when they visit the city. The supply was in charge of Repsol, which used five tanker trucks that had previously been loaded with LNG at the terminal of Reganosa. In total, 178 cubic meters of fuel were delivered.

The vessels are the Samnøy and Huftarøy ferries, which were just built at the Turkish Tersan Shipyard, and stopped at Ferrol on their way to the Norwegian fjords, where they will be used in passenger services by the Torghatten Nord shipping company. With a length of 134 meters and a width of 21 meters, both vessels have been designed to transport each one to 545 people and up to 180 vehicles.

Ferrol has the advantage of having a terminal like Reganosa in its port. In addition, the Port Authority of Ferrol-San Cibrao was a pioneer in the study of measures to develop this supply, in partnership with Reganosa, Navantia and the container terminal operator of the outer port. Precisely, the containership fleet is expected to further grow LNG adoption: the number of vessels is increasing at an annual rate of 15-20%.

José Manuel Vilariño, president of the Port Authority, said: “Ferrol is very well positioned to attract LNG bunkering customers, as it has LNG available at the port and is located in a strategic location, at the gates of the Baltic and North Sea, which have been declared ECA zones, where the emission of gases by maritime transport is limited”. In these areas, ships must change the fuel oil for another type of fuel with a low content of pollutants, such as natural gas.

In addition, Reganosa is working to turn Ferrol into the LNG hub of the Iberian northwest, adapting its Mugardos facilities to the new challenge of small-scale LNG transport. The Parliament of Galicia fully supports this project, which is considered strategic.

The Iberian Peninsula currently offers one of the fastest growing markets in terms of the adoption of natural gas in maritime transport. In this extremely encouraging scenario, AltFuels Iberia 2019 will take place on 11-14 June at IFEMA Trade Center, Madrid. It will be an event consisting of first level conferences and exhibition of vehicles of all kinds, refueling stations, components, plants, road and marine engines, as well as the entire universe of the alternative fuels industry with the latest technological developments, multiple options for networking, business and new advances. For more information, please contact info@altfuelsiberia.com.