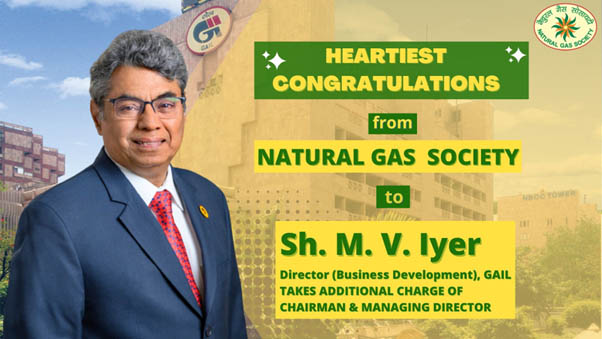 An electrical engineer, Sh. Iyer has 35 years of rich and diverse experience in GAIL in projects execution. “He has been part of the core team of GAIL for implementation of various long-term and short-term strategies in GAIL.

The company further outlined that he is entrusted with the responsibilities for a period of 3 months w.e.f. September 9, 2022, or until a regular incumbent to the post is appointed or until any further orders are received by the company. His appointment on an additional post shall cease in case of any of the three events, whichever falls earlier.

He is also the Director (Business Development) of the Company and also has additional charge of Marketing Directorate.

Sh. Iyer is also Director in one of GAIL’s new joint venture company Indradhanush Gas Grid Limited (IGGL) for implementation of North East Gas Grid. He has been associated with several non-core business areas like commissioning of the Dabhol LNG terminal and implementation of 100 MW Wind power project, 5 MW Solar power projects and current thrust areas of City Gas Distribution (CGD) projects within a short span of one year.