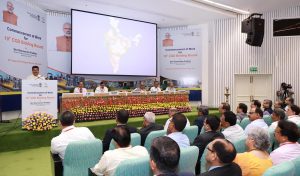 The Union Minister for Petroleum & Natural Gas and Steel, Shri Dharmendra Pradhan addressing the gathering at the Commencement of work for 10th CGD Bidding Round, in New Delhi on August 26, 2019.

Minister of Petroleum and Natural Gas & Steel Sh Dharmendra Pradhan on 26th August, 2019 launched the commencement of work for 10th City Gas Distribution (CGD) bidding round which will cover 50 Geographical Areas (GAs) in 124 districts. After the completion of the 10th round, over 70% of the country’s population and 52.73% of the area will be covered under the CGD. As per the minimum work program approved by the PNGRB for the 10th round, 2.02 crore PNG domestic connections will be provided, 3578 CNG stations will open, and 0.58 lakh Inch-km steel pipeline will be laid.

Speaking on the occasion, Sh Dharmendra Pradhan said that with the 9th and 10th rounds, the country is making a giant leap in the CGD. He said that in last 5 years, the number of domestic PNG connections, CNG vehicles and CNG stations have more than doubled.   He said that India is the 3rd largest energy consumer of the world, and will become top consumer in a decade. The government aims to provide reliable, affordable, sustainable and universal access to clean fuel to all. The present share of gas in the energy mix in the country is 6.2% compared to 24% globally, and the aim is to increase share of natural gas to 15% by 2030. The Minister said that with rising consumption of energy in the country, the share of CNG will increase the most.

He said that the country will continue to harness multiple sources of energy, including fossil fuels, renewables, EVs and gas. The hydrogen fuel driven vehicles have already been introduced in the national capital and several auto manufacturers have introduced new CNG models, the minister added. Even the coal will continue to have relevance, as Coal gasification plants are being set up. On the policy enablers to promote gas usage in India, Sh Pradhan said that CGD has been granted ‘public Utility’ status.

Sh Pradhan said that over 5 lakh crore rupees are being invested in gas infrastructure, which includes exploration, distribution, marketing, regasification, pipeline network laying, etc.  Domestic gas production was 32.87 billion cubic metre in 2018-19, and is likely to go up to 39.3 billion cubic metre in 2020-21. Present LNG terminal capacity of 38.8 MMTPA will be augmented to 52.5 MMTPA in next 3-4 years. Long term contracts have been signed for importing LNG, and its sources are being diversified. The gas grid presently is 16,788 km, and work is in progress for additional 14,788 km.

He said that the issues concerning the setting up of Gas infrastructure are being sorted out in consultation with the state governments.  The Minister also stressed on conservation and efficiency aspects, saying that new PNG burners can save upto 40%, compared to retrofitted burners.