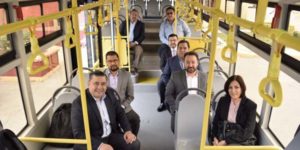 The introduction of 10 Ankai natural gas buses in the City of Chihuahua’s Main Route 1 has generated a saving of 10 million pesos (over U$S 500,000) during January, in addition to reducing carbon emissions into the atmosphere by displacing the use of diesel. This was announced by the head of the General Direction of Transportation of the State Government David Holguín Baca, during the Ordinary Session of the Board of Directors of the Transport Operator of Chihuahua’s Main Route 1.

Holguin Baca presented one of the new vehicles running on natural gas, supplied by Ankai dealership EGS Trucks, which also feature surveillance cameras, air conditioning and more comfortable seats than the buses that are currently in operation.

In the presence of the General Secretary of Government César Jáuregui Robles, the upcoming opening and start-up of a natural gas station was announced, which will be able to refuel up to 350 public transport vehicles. With this initiative, the Chihuahua government also seeks to promote the renewal of buses and the transition from diesel to CNG among the operators of the feeder routes.

With the introduction of the 10 CNG buses, Chihuahua’s Main Route 1 already has 90 vehicles, which gives enough capacity to take a bus every two minutes in “peak” hours.

Main Route 1 buses are supervised via GPS, which allows the operative personnel to detect the location of each vehicle in real time, compliance with established schedules and mileage, as well as fuel efficiency and possible incidents and excesses that drivers could incur, such as speed.

Natural gas for vehicles is gaining momentum in more states, interested in reduce emissions and fuel costs in public transport fleets, and will be the main topic at AltFuels Mexico 2019, taking place on 11-14 March at the World Trade Center in Mexico City. The event will feature first level conferences and exhibition led by national and international experts and companies that will share their experiences and knowledge with visitors and showcase the latest in alternative fuel technologies. For more information, please contact info@altfuelsmexico.com.