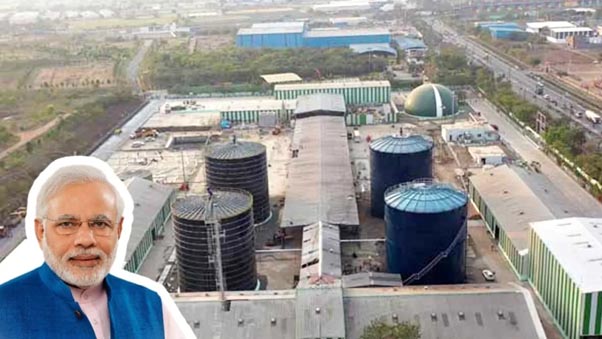 In clean energy push, Prime Minister Narendra Modi on Saturday, Feb 19 inaugurated Asia’s largest bio-CNG plant in the Indore district of Madhya Pradesh, saying efforts were being made under the Swachh Bharat-2 campaign to remove piles of garbage from vast chunks of lands in several cities of the country and turn them into green zones.

The 15-acre ground where the plant has been set up used to be a dumping zone. The Bio-CNG plant has been set up at a cost of Rs 150 crore and has a capacity of processing 550 metric tonnes per day. It can generate 17,500 kg biogas and 100-tonne high-quality compost every day. It will produce CNG with 96 percent pure methane gas, 50% of which will be provided to run public transport vehicles. According to estimates, nearly 400 buses will be operated by this Bio CNG gas. The plant has been set up by the Indore Municipal Corporation (IMC) on the public-private partnership (PPP) model as per the Centre’s ‘wealth-to-waste’ initiative at an initial investment of Rs 550 crore and is likely to generate 19,000 kg bio-CNG gas. The IMC will purchase bio-CNG at Rs 5 per kg and use it to fuel nearly 400 of its buses.

CM Chouhan stated that cow dung will also be used to provide necessary bacteria for the decomposition of garbage which will be purchased from nearby villages. This will be a source of income for villagers who rear cattle, PM Modi said. Nearly 1,600 municipalities are being equipped with material management facilities to end single-use of plastic. If cities are clean, people from other places will visit them. A boost to tourism will kickstart a new economy, he further added.