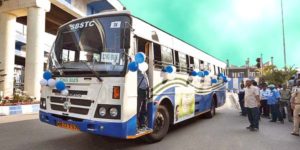 Buses powered by compressed natural gas (CNG) were introduced between Asansol and different parts of the state, including Calcutta, on Wednesday.

Chief minister Mamata Banerjee flagged off the green fleet to be operated by the South Bengal State Transport Corporation (SBSTC). The fuel switch is aimed at bringing down rising levels of air pollution across parts of south Bengal.

Twenty such buses will connect Asansol to Calcutta, Bankura, Burdwan and other destinations. State government officials said there are plans to introduce CNG bus services across Calcutta. “To begin with, we are staring the service in Asansol. The gas is available there,” Mamata said.

The buses manufactured by Ashok Leyland cost Rs 34 lakh each and were funded by the environment department, sources at Nabanna said. Each bus has 56 seats and a tank capacity of 110kg. The buses will run on coalbed methane, a natural gas, and are likely to vibrate less and be less noisy.

Experts said the switch from diesel to CNG would bring a change in the city’s air quality index. The National Green Tribunal recently slapped a Rs 5-crore fine on the state government for “failing to comply” with its two-year-old directive to combat air pollution in Calcutta and Howrah.

Studies have shown CNG is more environment-friendly in terms of carbon emission and pollutants compared with diesel, which contains ultra-fine particulates that penetrate the lungs and trigger many diseases.

“We plan to bring CNG service to Calcutta. We met officials of a state-owned oil and gas company that has recently bagged the right to bring CNG to Bengal,” a senior SBSTC official said.