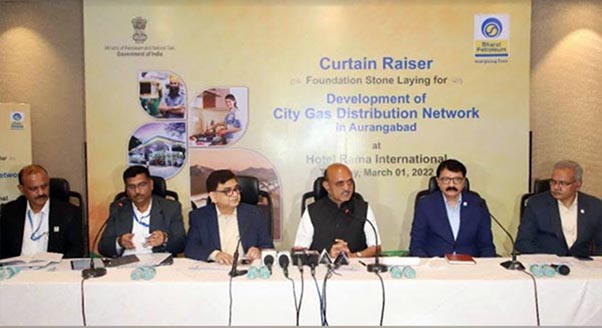 Union Minister Dr. Bhagwat Karad on Tuesday, March 01, declared that Bharat Petroleum Corporation Limited (BPCL) has launched a gas distribution network in Aurangabad and Ahmednagar districts of Maharashtra and would invest Rs 4,000 crore for the completion of the project. The minister of state for finance was addressing a press conference with the BPCL officials here.

“The ground-breaking ceremony of the project will be held in Aurangabad on Wednesday, for which the Minister of Petroleum and Natural Gas Hardeep Singh Puri will remain present through video conferencing. The work on the gas distribution network line work is underway from Srigonda in Ahmednagar to Aurangabad. The ceremony will be the commencement of the distribution line in Aurangabad city. By December, gas will be supplied through a pipeline to households in the city,” the minister said.

Talking to reporters, BPCL’s executive director (gas) Sukhmal Jain said that the company will spend around Rs 1,600 crore in the next five years and a total of Rs 4,000 crore for the completion of the project.