Developing countries of the world have pledged to reduce Green House Gas emissions (Kyoto Protocol and the Paris Agreement) and their side effects. Over the last 25 years, the world shifted much of its carbon-intensive manufacturing of steel, cement, ammonia and plastics to the developing world. As a result, adoption of wind, solar, energy storage and nuclear power may end up being the primary factors of the focus area to achieve the future global emissions targets. Taken together, the aggregate impact of nuclear, hydroelectric and solar/wind generation reduced global reliance on fossil fuels from ~95% of primary energy in 1975 to ~85% in 2020. In other words, energy transitions take a long time and lots of money. The USA has also set a target for itself. Announcing that aim, USA President Joe Biden said he would do his utmost to reduce GHG emissions by almost half in the coming 10 years (50% decline by 2030 vs a 2005 baseline), while meeting his goal to slow global warming.

The governments of all the dedicated countries generally agree to control emissions after realizing and understanding the science behind climate change, but have divergence in opinion about who is most responsible and how to set emissions-reduction goals. The US, Europe and China collectively represent a little over half of the global total. Europe is way ahead of the US and China on renewable/nuclear penetration on the grid and on reducing fossil fuels as a share of primary energy. Direct use of fossil fuels is still the primary source in the modern world, though the demise of fossil fuels continues to be prematurely declared by energy futurists. According to the IEA report, 70%-75% of global primary energy consumption may be met via fossil fuels in the year 2040.

About 60%-80% of US oil, Gas and NGL production is reliant on hydraulic fracturing, and the US is still  reliant on fossil fuels to an extent of 75%-80% for primary energy. Against this backdrop, the Joe Biden administration announced policies to reduce oil & gas supply & demand and to decarbonize the electricity grid by 2035. Annual gasoline consumption in the Us in 2019 was 142 bn gallons per year (2019) and estimated 12.4 billion in demand reduction by 2025 would only be a 9% decline. In other words, the US would still need plenty of gasoline in 2030 and beyond even if the Biden agenda is implemented using our assumptions.

US solar power is still a small contributor at 2.8% of electricity generation and 1.2% of primary energy. Wood MacKenzie expects solar generation to double by 2025, but that’s still single digits in share terms. On a national level, utility-scale solar power on the grid accounts for 2/3 of solar generation while small-scale distributed solar on residential, commercial and industrial rooftops accounts for the rest. 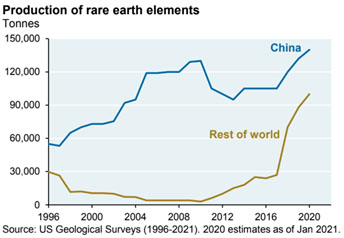 For the past several years, China had an effective monopoly on the production of rare earth elements (REE) used to make rechargeable batteries, wind turbines and energy-efficient light bulbs (and F-35 fighter jets and nuclear subs). Almost 90% of exports go to 5 countries (Japan, US, Netherlands, South Korea and Italy). China has used rare earth metals diplomacy in 2010, it cut its REE export quotas by 37%. This led to a temporary ten-fold increase in REE prices per metric ton. Again in 2021, China’s Ministry of Industry and Information Technology proposed controls on the production and export of REE. In other words, we might see another spike in global REE projects and prices if China is going to preserve its REE for domestic use or for use in trade disputes.

Due to its low price and high heat value, coal is a primary winter heating fuel in Northern China. Excessive use of “kang” bed-stoves in China also leads to the use of coal on a larger scale, it is used as fuel in northern China during the winter season. However, without desulfurization and denitrification, kang bed-stove combustion of coal releases sulfur dioxide, nitrogen oxide and other air pollutants directly into the atmosphere. It seems more efficient to burn coal directly for heat than combustion of coal to make electricity to power electric heaters. China’s electricity grid is 65% reliant on coal. Supply of renewables into the urban areas may solve part of this problem in China, but there’s a broader issue to curb carbon emissions. Electrification of everything may help to improve air and water. Estimating that electrification before grid decarbonization can improve some environmental issues while at the same time making others worse.

China has set targets for the increase in electric vehicles in the country. Even if China succeeded with its plan for 25% of EVs as part of vehicle sales by 2025 despite this China has a bigger challenge than this- decarbonization of China’s massive industrial sector, which consumes 4 times more primary energy than its transport sector and even higher than that of US and European industrial sectors combined. In contrast to the US, China uses 10 times more coal than natural gas (73.5 GW of new coal plant proposals in 2020, over 5x the rest of the world combined). This is why most deep decarbonization ideas rely on the replacement of fossil fuels rather than reducing fossil fuel consumption per capita or per unit of performance.

Electric vehicles are gaining market share due to their constantly decreasing battery prices, and subsidies being provided by the government. The IEA has also projected in one of its reports that by 2030, global EV sales will be 40% in light vehicles. Norway is outperforming all other countries. In a developed country such as Japan, EVs accounted for a very small (0.7%) share of vehicle sales in 2020. The Japanese government plans to phase out ICE cars in the mid-2030s, by which time most cars must be hybrid or fully electric. This is an aggressive timetable compared to current production.